Last winter the Ludington area received 110"... yes, that's ONE HUNDRED TEN INCHES of snow!  This year, it seems we are getting more wind than snow, at least they are in town.  Wesley & Michael went to the State Park to take part in an evening snow shoe walk on Saturday, with the path lit by mini Coleman lanterns.  Unfortunately, there was so little snow that the snow shoe walk turned into a regular snow BOOT walk to the beach. There was a bonfire before hand, and Wesley & Michael also continued their own walk within the park later in the evening..
Friday, they were going to head out to 'look for snow', in anticipation of the potential snow shoe walk....  they ended up going down to the beach and bringing back 3" thick pieces of beautifully clear LAKE MICHIGAN ICE. 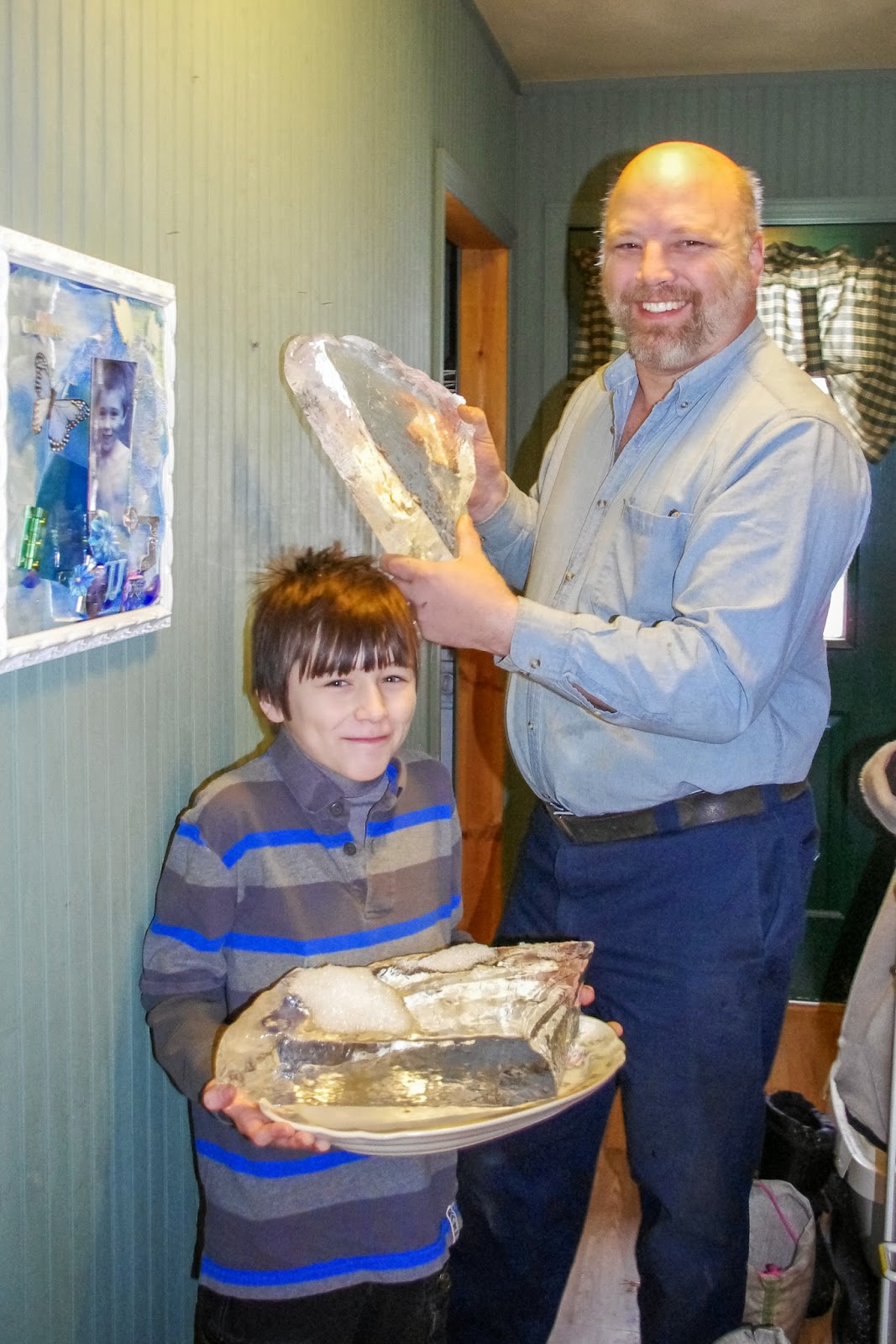 On their way home, Wesley told Michael "Let's see mom scrapbook THAT!"  You can BET I will.

Before they left for one of their adventures, Wesley & Dakota were playing outdoors.  I asked Michael to take a few photos for me (I was in the middle of another project downstairs) because I had a layout I wanted to create.  They were still playing a few minutes later, so I took some more.....you can never have TOO many photos to scrap, right? 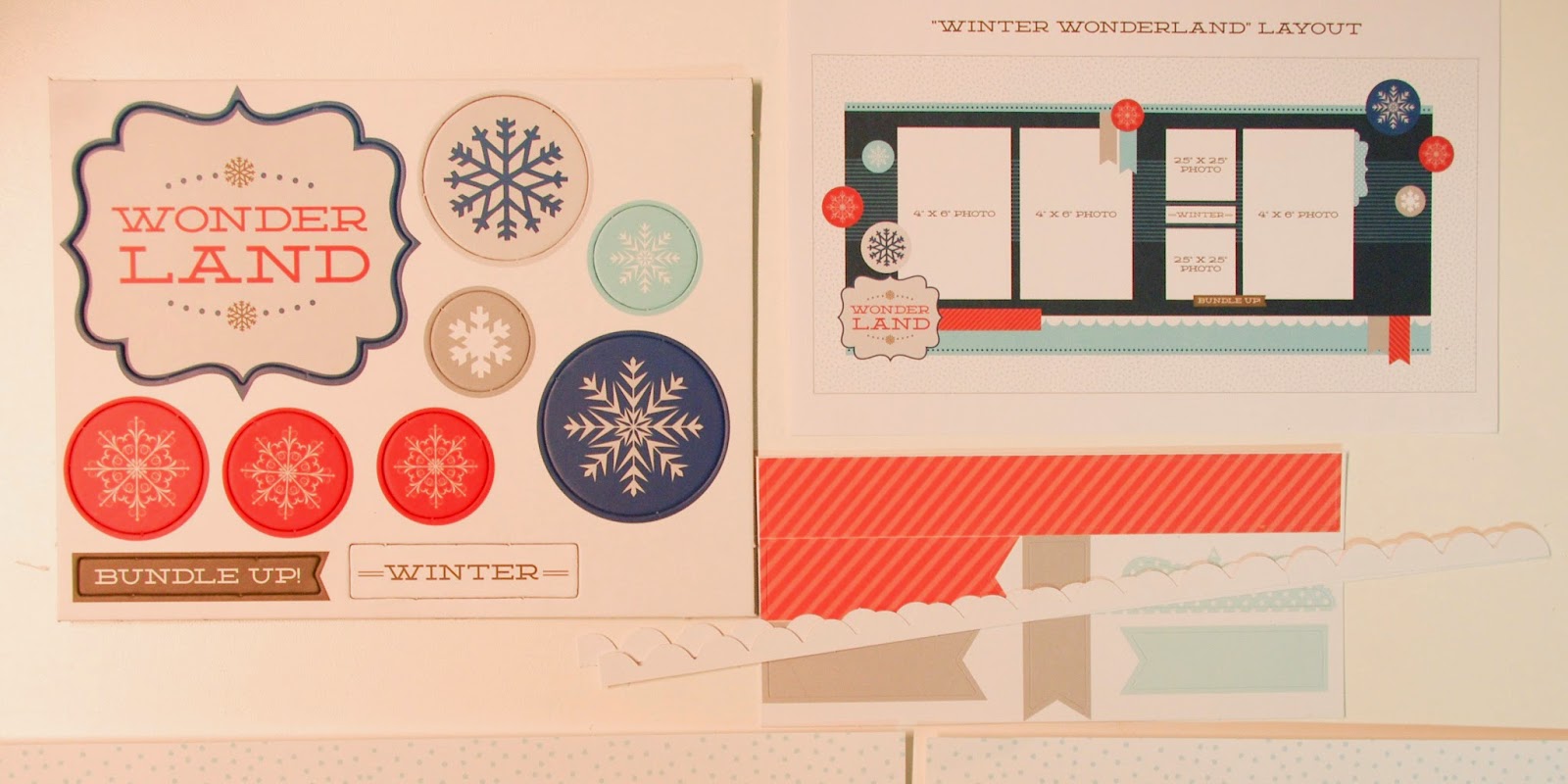 I used the Winter Wonderland layout kit by Inspired Inc, using all but 2 pieces of the kit. 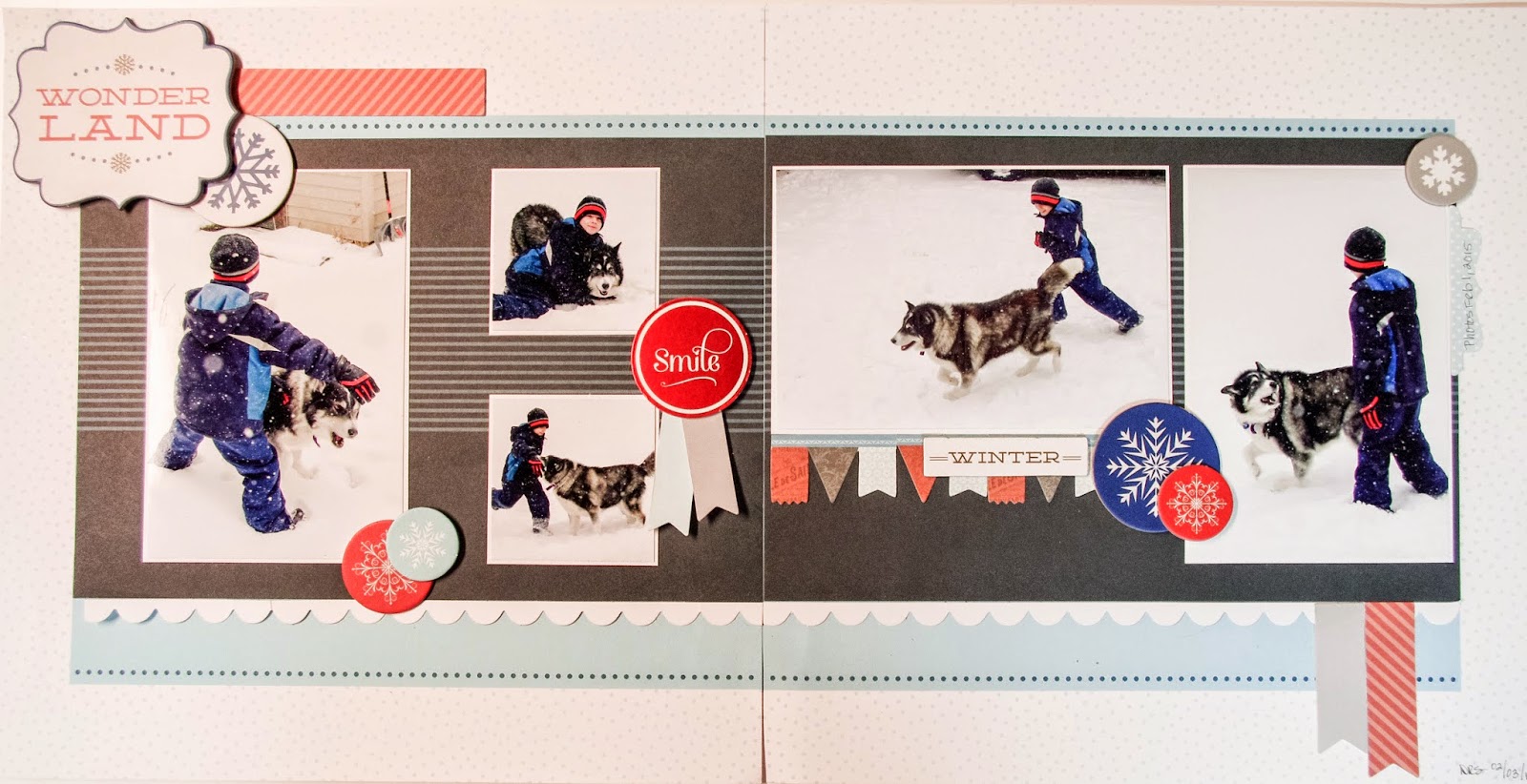 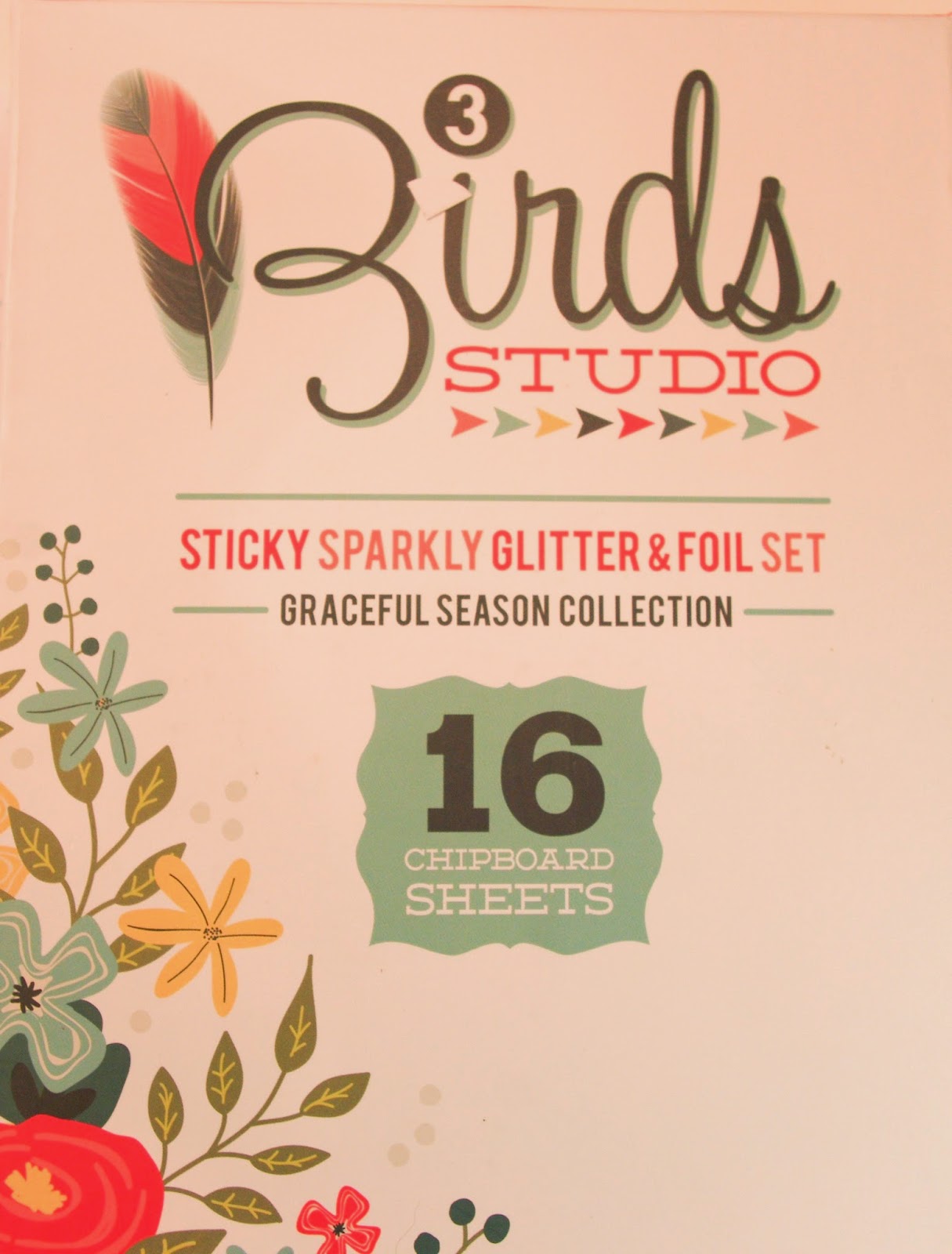 I ADDED one piece of 3 Birds Sticky Sparkly Glitter & Foil Set, part of their GRACEFUL SEASONS COLLECTION.  The foiled red "Smile" which sits beside the two 2.5 inch photos near the center of the two pages fits those photos and the mood of their activity that afternoon.  I like that the foil not only catches your eye, drawing your attention to the 2 smaller photos, but I like that the foil also helps liven up the page, since there are so many other dark colors within it.  I also layered some pieces cut from banners from an earlier 3 Birds border kit and placed them below the chipboard "winter".  I LOVE to sort through my stash and find things that match the colors in my photos.
I also LOVE to mix and match kits as well as collections, so to any of you who are purists in terms of using kits or working with only one company's products, I apologize.  BEWARE:  I DO THIS QUITE OFTEN... You've been warned lol.
Posted by Unknown at 12:00 AM No comments: 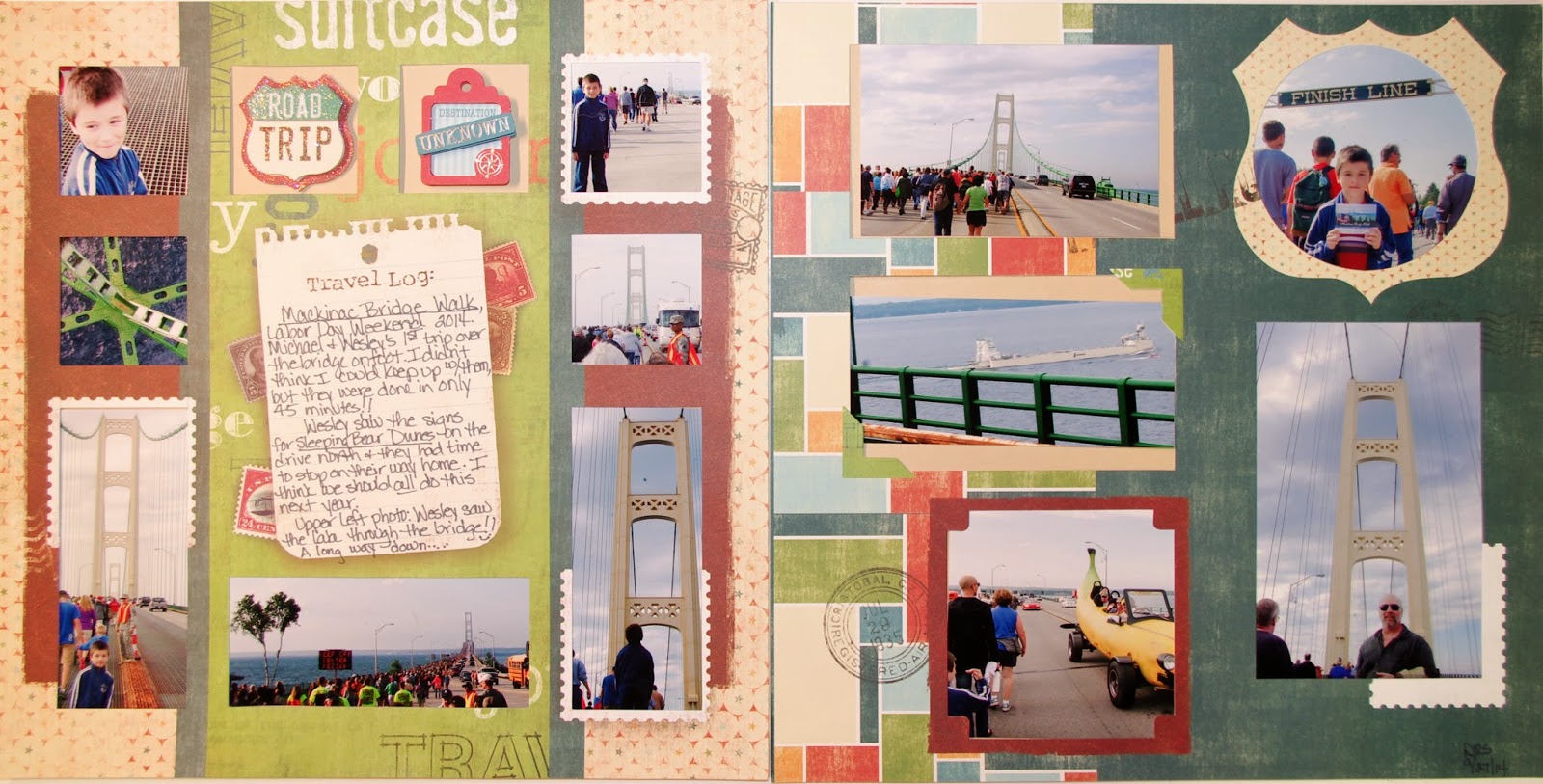 This layout was created during the Crop & Craft for Missions fund raiser.  It's rare that I get even one page completed during the local fund raisers, since I'm not only there as a vendor, but I also ESPECIALLY enjoy chatting with friends and walking around throughout the day to see what others are creating.
Another blast from the past in terms of kits, but here it is combined with 2014 photos and more of the earlier 3D embellishments offered by 3 Birds.
This Labor Day Michael and Wesley walked the Mackinac Bridge with THOUSANDS of others, as part of the Annual Bridge Walk between the two peninsulas.  I chose not to go, thinking it would take about 3 hours to complete the walk, and I didn't want to hold them back.  Plus, if I went, I wanted to take my beloved Dakota with us.
It turns out that they completed the walk in under an hour!  I also believe that they said others brought their dogs with them for the walk, so I WOULD be able to take Dakota... I told them that it sounds like we need to go with them next year.
As usual, Michael & Wesley took a side-trip, this time to Sleeping Bear Dunes.   Wesley had seen the signs for it on their way to the bridge that morning, and since they were done early enough, off they went!
They got home late, especially when you consider that Wesley's 1st day of school was the next day, but they really enjoyed themselves.


Today's installment covers a different type of walk than Wesley, Dakota and I usually take.  This particular day I decided to take Dakota to our local dog park, 'Bark in the Park'.  Rather than merely going inside the doggy park to roam around and play with others dogs if present AND well behaved, we decided to explore part of the adjacent walking path which winds through the woods between the dog park, local cemetery and the Lincoln River. 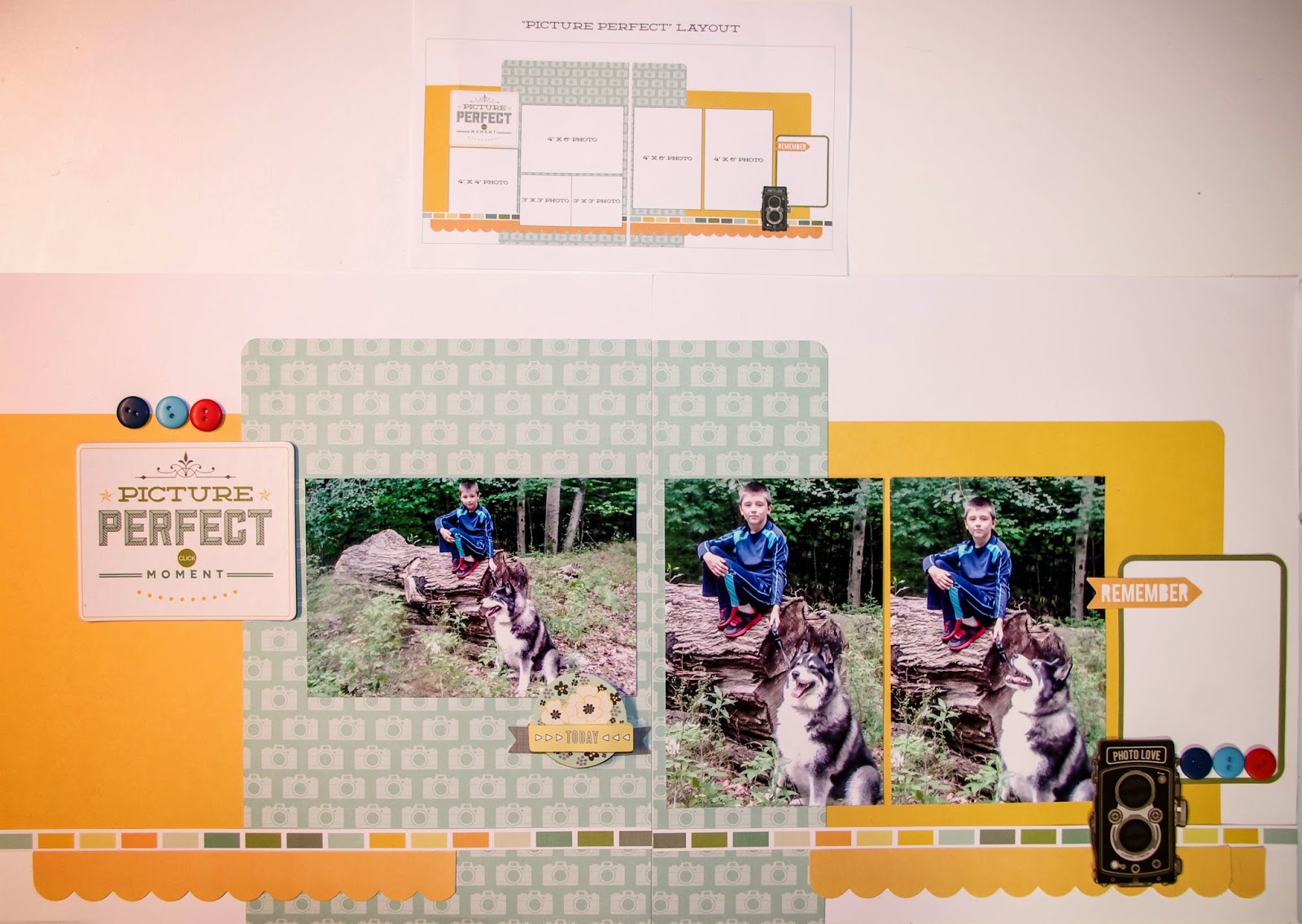 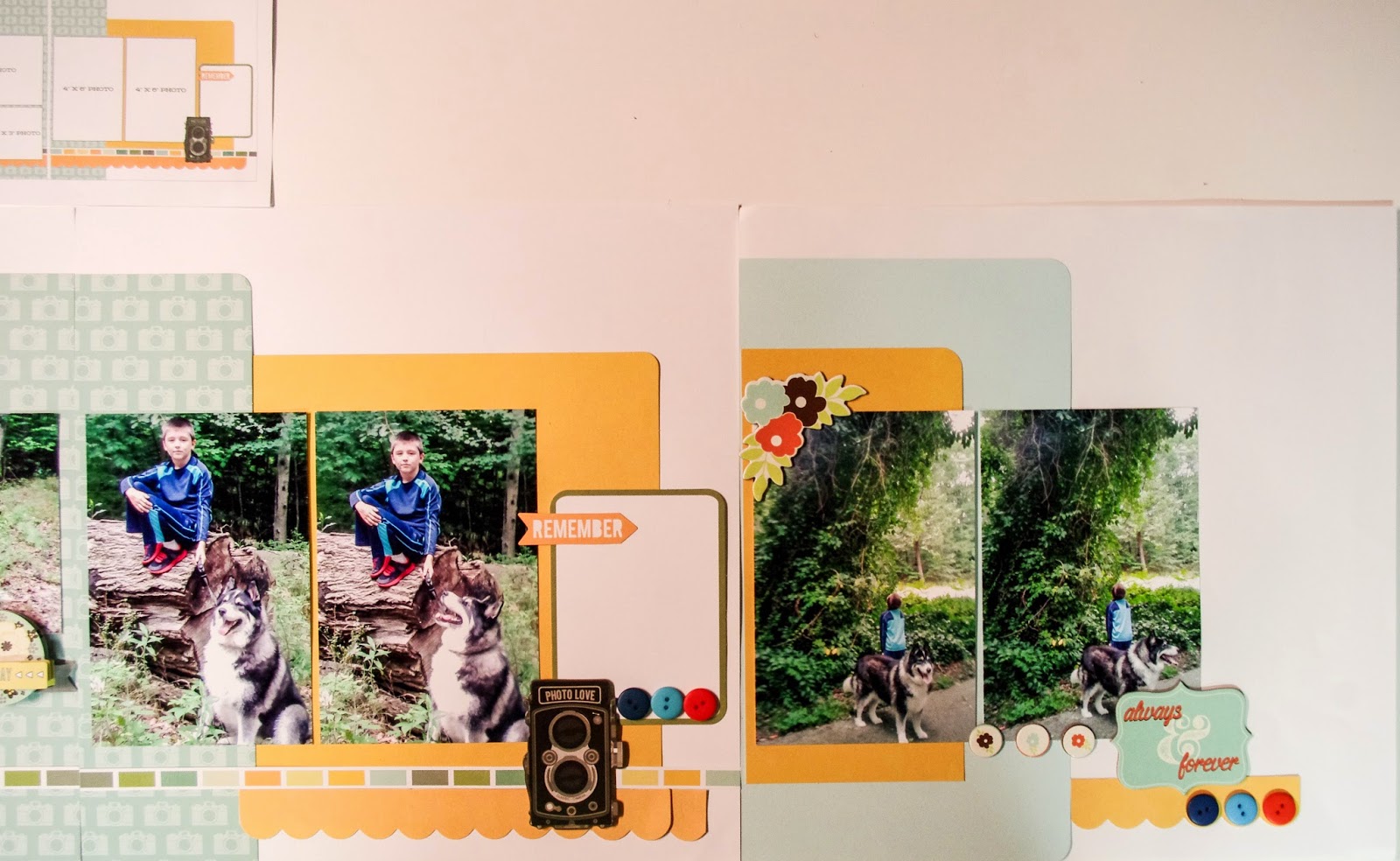 This is another situation where I needed to create a companion page in order to include all or at least most of the photos that I wanted to use.  I searched my stash of papers, cropped corners to match those of the kit pieces, and used some of the remaining kit items to pull the pages together.
I also had to adapt the layout to fit the number, sizes, and orientation (vertical vs horizontal) of the photos I wanted to work with.
I'm not crazy with the outcome, due to the fact that the blue camera pattern paper is busier than I usually use, and more of it is exposed therefore making it more visible, but the theme works well with this story, and the blue and black coordinate with Wesley's clothing and Dakota's coat.

Hello friends and family.  This will take a while for me complete, but I am working diligently to play 'catch up' on postings of my projects from 2014-2015.
Below are 2 pages completed with one of the Inspired Inc Top Page layout kits, followed by a companion page that I created in order to include more of the fun photos from an afternoon of family play time in our home town.  The colors of this kit fit really well with the colors of our clothing as well as the BEAUTIFUL blooming tree which is part of the mini golf course.  I used part of another Top Page Layout kit, specifically the rainbow portions, to pull the colors from the prior two pages into the companion page. 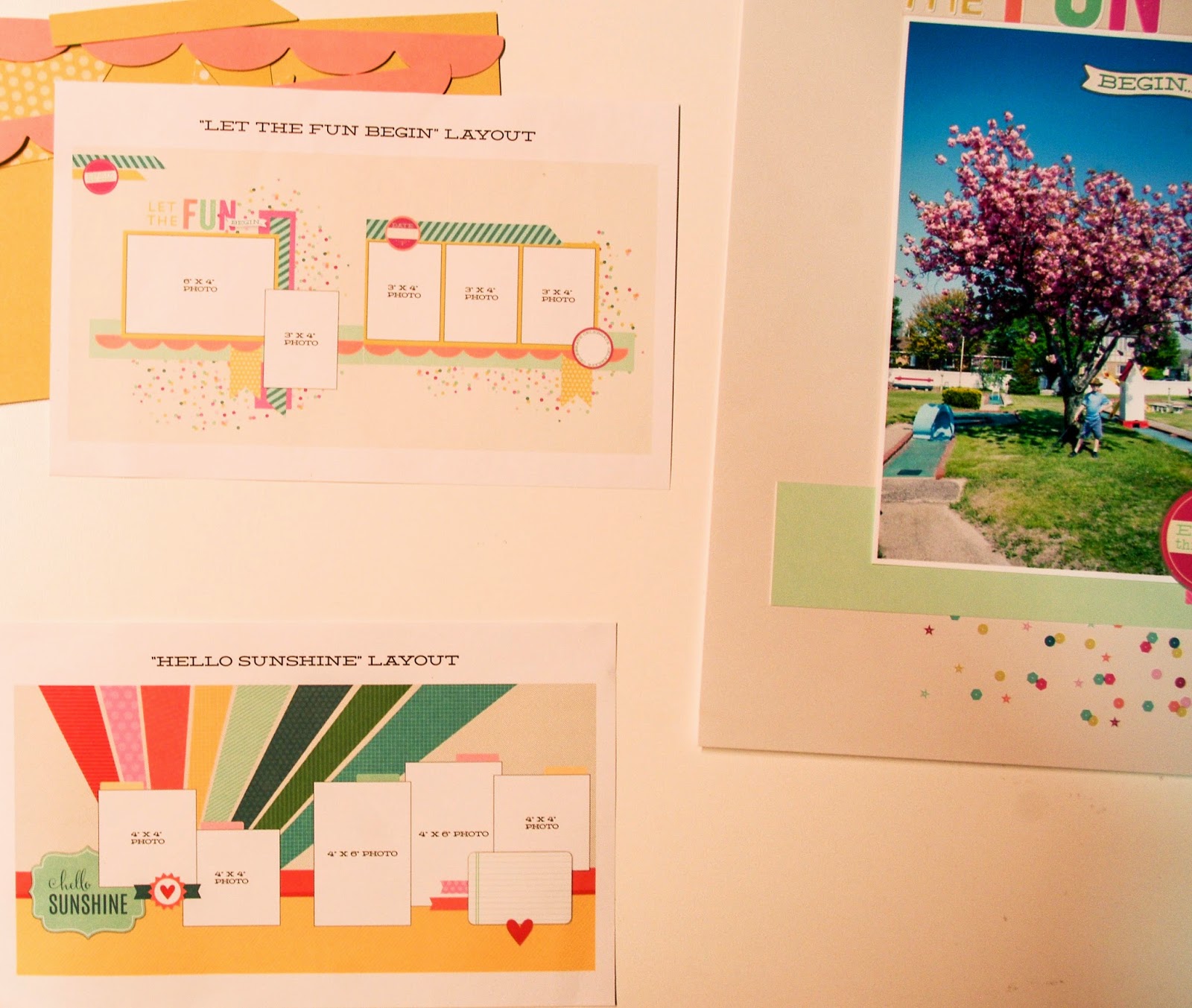 As you can see, I had to alter the layout suggested to fit my photo orientations, number and sizes, but the colors really helped to pull the pages together. 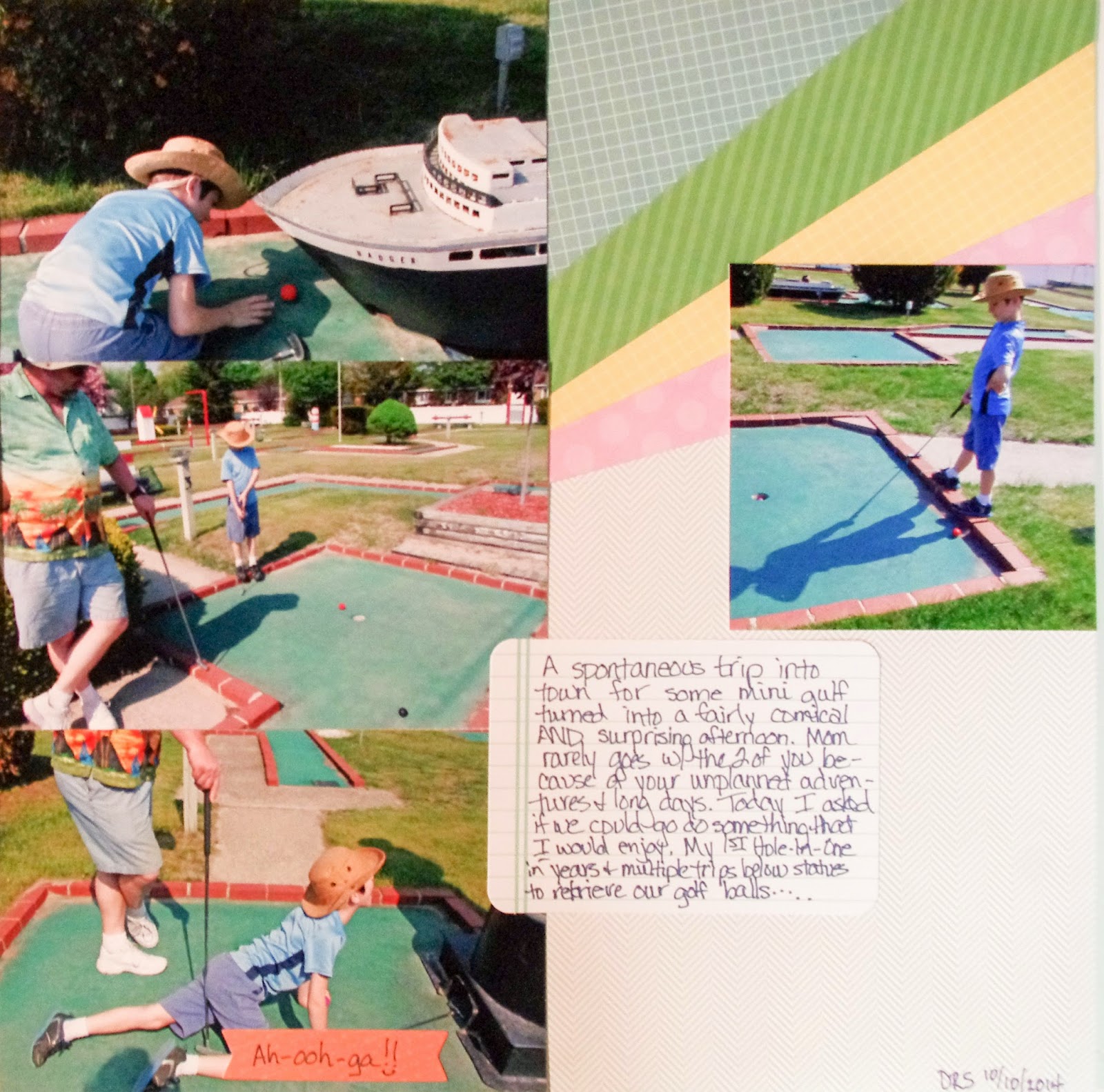 Wesley joined Cub Scouts this year, and their only fund raiser is their annual popcorn sale which takes place in front of the local hardware store where the scout leader works...brilliant!  When combined with the fees each cub scout pays annually, this fund raiser covers the expenses of some of their activities.   Our favorite popcorn that they sold is the dark and white chocolate popcorn which Wesley is holding in one of the photos... a very popular seller. 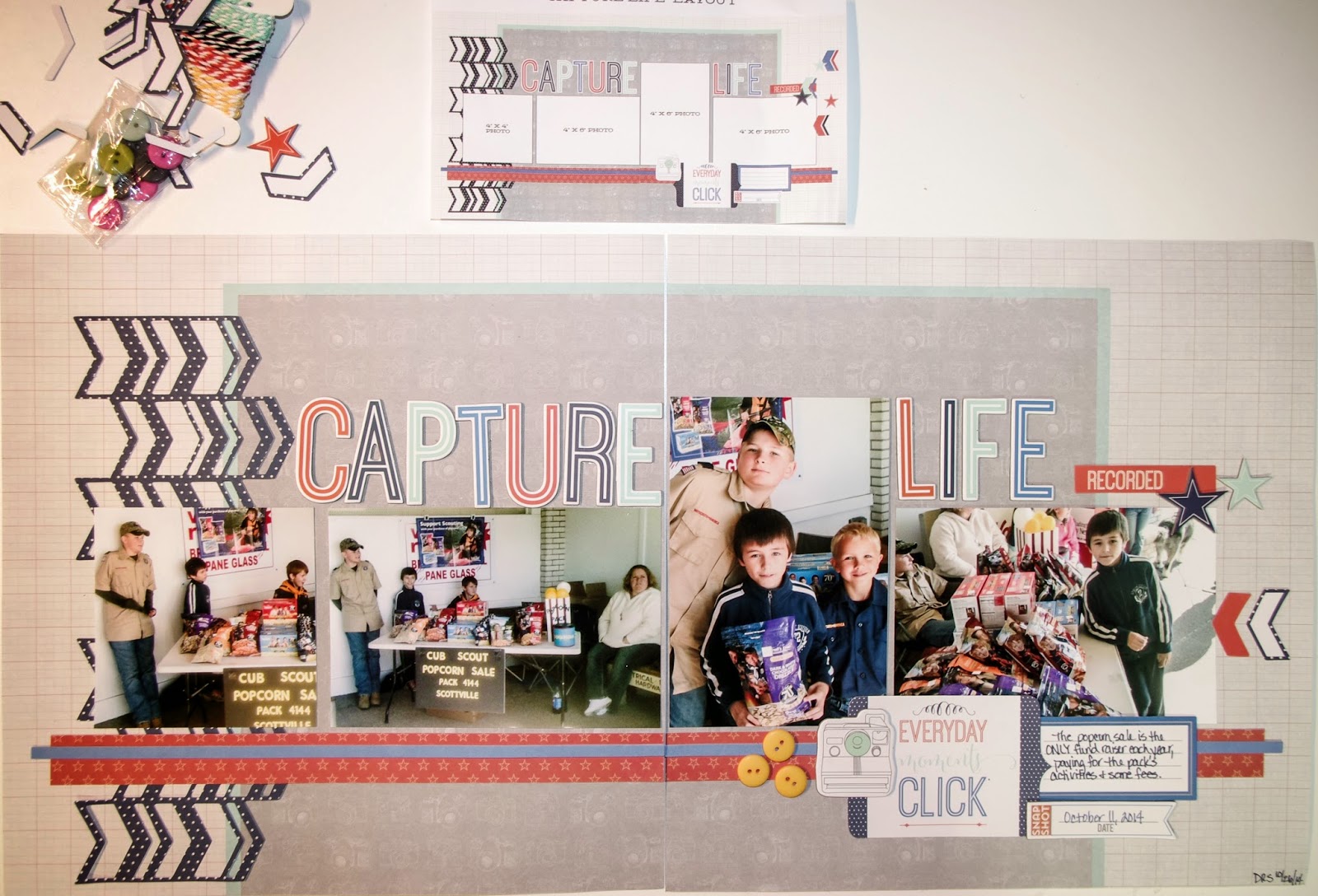 This layout kit featured brown tones along with orange and green accents, which worked well with our annual outdoor chores or activities.  Wesley has been learning to drive our lawn mower on his own, actually enjoying some of the outdoor chores since he's been allowed to drive.  Sometimes Michael lets him just zoom around the yard for fun.... typical kid at this age range. 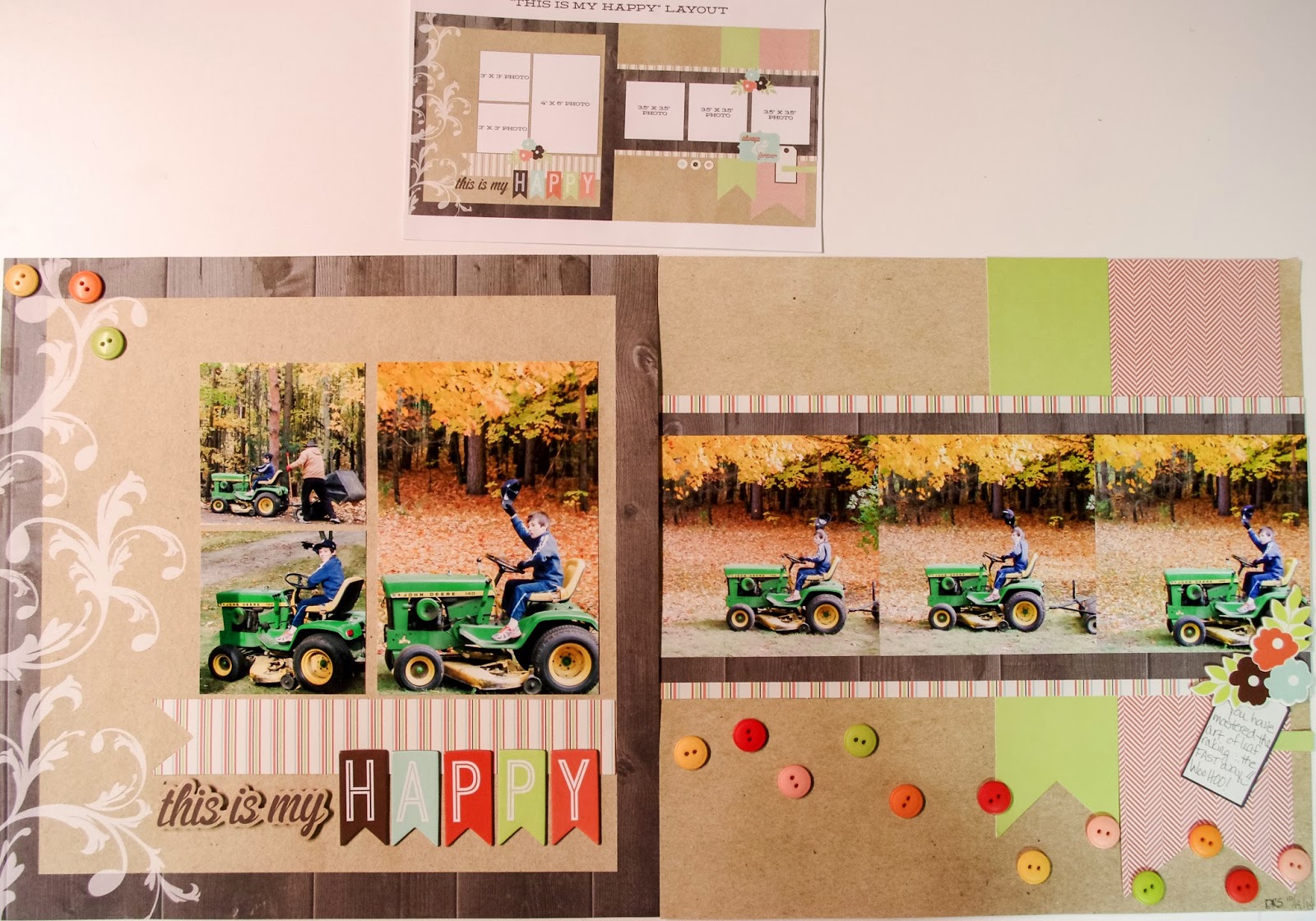 During two of our local fund raising crops, Crop For A Cure & Crop and Craft for Missions, I was able to crank out a few more projects by using some of my huge stash of kits by 3 Birds.

This is one of the many diecut page kits that 3 Birds has offered since I discovered them around 2009.  Since I am a 3D embellishment lover/hoarder as well, and have so many pieces which coordinate with their color schemes over the years, I took advantage of the situation to create a quick (it usually takes me hours to complete a layout), balanced and fun layout.
Not only was this our first vegetable garden at this home, it was Wesley's first opportunity to grow his own pumpkins.  We were quite surprised to see that we were able to get not only one or two, but 4 pumpkins.  The pumpkins were small, but it was a nice learning experience for Wesley as well as Michael and I, as we learned a bit about how well some things may or may not grow in relation to its location in our yard, the amount of rain we did NOT receive this year, and the cooler than normal temperatures we also experienced during this odd summer season.
We planted 3 types of tomatoes, locating them on the West side of the raised bed so that the corn was less likely to shade them out.  What we learned about the tomatoes:  they grew like MAD in relation to the other plants, and therefore are going to have their OWN bed next year!
The peas tasted WONDERFUL and were the family favorite, with us fighting over the few that we were able to harvest.  The tomatoes growing like weeds shadowed them out, plus we definately need to plant more pea plants next year.
The corn didn't do diddly.... too little heat as well as rain (yes, we watered the garden almost daily)
caused our corn to only grow a few feet, not being any where near 'knee high by fourth of July'.  Local farmers struggled with the same problem, but we were able to buy a fair amount of locally grown sweet corn from the 'Larsen Girls', granddaughters of my scrapbooking friend, Judee Larsen.
I accidentally picked one of only 2 peppers that grew this summer, upsetting Michael a bit.  I didn't check the label of that particular plant before picking the lovely green pepper which was calling my name.  When mature, it was supposed to be red....oops.  I got to enjoy it since it never fully ripened, and Michael was no longer interested in it.
Next year we plan to build at least one more raised bed like this one which Michael and Wesley built for me.  As mentioned above, we will definately be giving the tomatoes their own bed, perhaps with corn getting it's own private 'suite', and lots more peas being planted.
Posted by Unknown at 12:00 AM No comments: